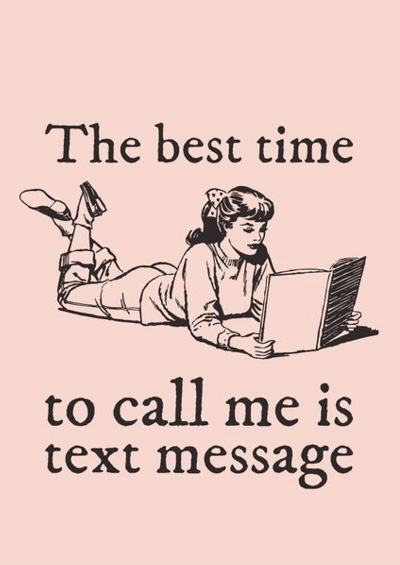 I’m only a text away.

I hate talking on the phone. And this really bugs people who do.

Every once in a while I find someone I enjoy talking to but it is not often. And it’s never in the form of friendships. I haven’t had a friend I enjoyed talking on the phone with since high school. That friend was Mariah and we are still friends today. We don’t talk on the phone much these days though.

But anyways, like I said, I don’t like talking on the phone. Some will argue that they are more personal and I would agree.

I think that’s exactly I don’t like them, however.

Phone calls invade my privacy. And they usually come in when I’m spending time with myself.

As someone who is in and out of depression, phone calls can be really draining for me. Is it not enough that I have to put on a front at work, now I have to put one up in the comfort of my own home? No thank you.

I wish people would understand this. I’m a single mother, who works 10 hours a day, and suffers from anxiety and depression. Which means, your phone call is most likely interrupting my “me time” and I do not like it. Why do people think I have time to chat? I do not. As I once said “even when I’m not busy, I’m busy.”

Plus, I am a writer. I like being able to think about my response, realizing that’s not actually what I want to say, backspacing and trying it again. Texting is a luxury I like to take advantage of.

I hate strongly dislike when people do not respect this. They try to force you to communicate in one way because they feel like it’s the best way.* But the best way for me to communicate is through text. If you want to get in touch with me, and I prefer texting, text me. If I want to get in touch with you, and you prefer phone calls, then I will call you. That seems completely fair to me.

Yet, people will disregard how you feel and still call you.

I recall a time I was possibly getting into business with someone, but she did not respect my no phone calls boundary. I asked her nicely, multiple times, if she could text or email me instead when we were discussing business. Not only because I hate talking on the phone but also because I thought it would be better to keep things in writing. She continued to call, which was like a slap in the face to me.

Needless to say, I decided I didn’t want to continue working with her. (But the phone calls wasn’t the sole reason. I felt like she crossed a few of my boundaries and I didn’t know how to tell her nicely. )

Just as people have different love languages, people have preferred ways of communicating and that should be acknowledged and respected.

I wish people would be more considerate.

*This not the same as trying to work on communication in a romantic relationship. I feel like in those cases, compromises should be made in order for both parties to communicate effectively. This post is regarding relationships with family and friends.